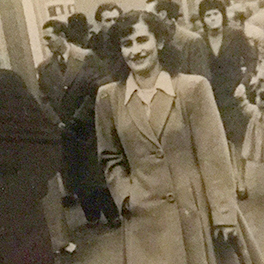 Adele Kofman was born on March 3, 1925, in Ulanow, Poland. The Nazis entered Ulanow in September 1939, followed by the Russians, who had signed a pact of cooperation with Hitler. When Hitler attacked the Soviet Union in June 1941, the Russians evacuated and Jews were allowed to flee east. Adele, her parents, and three of her siblings--Shloima, Chaya Gittle and Itcha, along with Itcha's wife Genya and their children, Maurice and Nusha--fled and were resettled in labor camps in the Ural Mountains and Siberia.

Meanwhile, her brother Yehoshua Heschel, who had moved to Amsterdam for business opportunities during the Depression, was deported to Auschwitz with his wife, Gittel, and their three children, Mindl, Israel and Eliyahu. Only Israel survived. Adele's sister Mala, who had remained in Poland with her husband and baby, were shot and killed by the Nazis.

At the war's end, Adele and her family in the Soviet Union were sent west, first to Uzbekistan and then to Poland, where she and her first husband had a daughter, Lily. In late 1946 they were smuggled to Czechoslovakia and within weeks continued on to Paris. (From there, Adele's ex-husband took Lily to Palestine, where she grew up.) Over two years, one by one, Adele, her parents and surviving siblings got visas to resettle in Toronto, where Adele's sister Bayla had been living since the late 1930s. Another two brothers, Srulik and Leo, had also emigrated before the war, to Providence, RI.

Adele arrived in Toronto on September 18, 1949. Precisely a year later, with a student visa to study ESL, she moved to New York, where she lived with her brother Srulik in Brooklyn. Her childhood sweetheart, Martin Fishbein, had gotten in touch with Adele's brothers when he came to New York after the war, and when she arrived, she called him up. Their courtship was short and sweet. Adele and Martin got married on March 25, 1951. They had two daughters, Cheryl and Susan. Adele passed away on November 4, 1987. She is survived by her three daughters, eight grandchildren, and their children, including Heschel students Noémie Adelia and Léa Paule Rak.