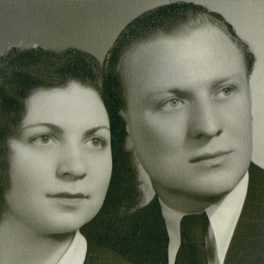 Andy was born as Moshe Davidovits in 1919 in a small village in Czechoslovakia (which is now the Ukraine).

He served in a labor camp throughout World War II and was one of the very few survivors of that camp. He came home after the War having been ravaged by illness and starvation to discover that he had lost his entire family. In an effort to begin his life anew, he met and married a woman named Tova (Terry), and they started a family.

Andy conducted some very successful business activity after the war in Hungary, which caught the negative attention of the controlling Russian Communists. In 1950, he attempted to flee Hungary with Terry and their two children, Tom (then age 3) and Judy (then age 1). They were caught by the Russians and Andy was killed at the border. His wife, Terry, spent three years in jail, while their children were cared for by family friends.