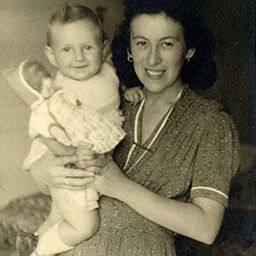 Hanna Rydelnik was born in 1923 in Zagórze, Poland but grew up in Będzin with her five brothers and sisters. The family was placed in the Będzin ghetto until 1942 when the majority of her family was deported to Auschwitz-Birkenau. Hanna and her sister, Genia, were briefly in hiding before enduring a series of forced labor camps and surviving a death march in the winter of 1944. Upon her arrival at Christianstadt, Hanna and four other girls escaped. They were liberated by the Soviet army in Sommerfeld, Germany in February 1945. After a trip back to Poland, Hanna lived in and around Munich until she immigrated to the United States with her husband and first child in 1949.

In 1944, sisters Hanna and Genia smuggled a pair of pliers, cut the fence and escaped from Christenstadt concentration camp. "We escaped in a forest hoping partisans would be there but there were none. We met a Polish officer who kept us until the Russians liberated us. If not for the Polish officer, I wouldn't be alive today."

After the war, Hanna worked for the State Jewish Committee in Katowice, Poland.

The Joint Distribution Committee found a sponsor in St. Joseph who guaranteed that Isadore Gutman would have a job and a place to live. Once settled in the United States, the family moved to the bigger city nearby, Kansas City. Their daughter, Louisa, married and had children. Valerie grew up in Kansas City then moved to New York City. Valerie married and had children, Mia and Liza Gerstein, who attend the Heschel School.

The Midwest Center for Holocaust Education

United States Holocaust Memorial Museum:
The Hanna Gutman papers comprise documents and photographs concerning Hanna Gutman, a Jewish secretary originally from Zagórze, Poland and a survivor of five concentration camps. This collection primarily documents her restitution claims and her life-long struggle with severe panic and anxiety as a result of her experiences in the Holocaust. Also included in this collection is a series of correspondence and photographs and papers collected by Gutman in the years immediately following the war and her subsequent arrival in the United States. Among these materials are her health identification card, certificates stating she was a political prisoner, police registration forms, and a progress report for the Naturalization Council in Kansas City, among others.