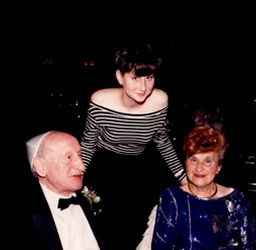 Avrum Kurtz was born in Radom, Poland in 1915 to Sura-Laya Grubstein and Leibish Kurc (as it was spelled in Polish). The second youngest of seven children, he had four sisters and two brothers: Sheindel, Yitta, Manya, Chaya Gittel, Duvid and Chemia. The family was moderately religious and the children considered themselves to be modern. Avrum was involved with the Labor Bund as a writer and actor.

In September of 1939, after the German invasion of Poland, Avrum was drafted into the Polish army. Immediately after Poland surrendered, he was captured by the Germans and spent nine months in a prisoner of war (POW) camp before being separated along with fellow Jewish prisoners and sent to forced labor and concentration camps. Avrum worked as a slave laborer in a munitions factory, where he suffered burns from handling hot metal and other injuries that resulted in life-long scars. He also spent time in the Buchenwald, Dachau and Mauthausen concentration camps, before being liberated in early spring 1945 by the Russian army from a work camp near Terezin. Tall and athletic, Avrum had been a soccer player before the war, although he was a tailor by trade. He had been asked to be a Kapo (Jewish prisoners chosen to oversee fellow Jewish prisoners) but refused and was beaten by a German soldier who dislocated and broke his shoulder, another injury that never healed properly.

After liberation, Avrum returned to Poland to see if any relatives or friends had survived but did not find anyone. His parents, grandparents and siblings, along with their spouses and children as well as several aunts and uncles were murdered at the Treblinka concentration camp in two transports that took place in September and December 1942. He was, however, subsequently reunited with two first cousins at a displaced persons (DP) camp in Stuttgart, Germany. There, he also connected with a third cousin, Sala Goldberg, who he married in May 1946. In the DP camp, they had a daughter, Laja (Lilli), and Avrum formed a Jewish militia to guard the camp from threatening Germans.

Sala was also born in Radom, in 1923, the youngest child of Chana-Mindel and Aaron. She had two sisters and a brother: Pessa (born in 1912), Frania (born in 1913) and Chaim (born in 1920). She came from a religious family but her parents were interested in the arts. Her mother, in particular, loved opera and she enjoyed going to the cinema. Her father was a cattle dealer and they were quite well to do until the economic depression hit Poland. Shortly before the start of the war, Sala's older sisters fled to France with their husbands and children. They survived by hiding in Grenoble but their husbands were rounded up with a group of foreign Jewish men, sent to the Drancy internment camp and then deported to Auschwitz, where they perished. Sala's sisters remarried after the war and spent the rest of their lives in Paris.

When the Germans invaded Poland, Sala was just 15 years old. She was forced to leave school and was sent with her parents to live in the Radom ghetto. Her brother, who had served as local cantor, was shot to death by the Germans before they moved into the ghetto. Her father, grandparents, aunts and uncles were ultimately sent to their deaths at Treblinka in the same transports as Avrum's family, in September and December 1942. Sala and her mother stayed together for the next year as they moved through several labor camps, until her mother was deemed unfit for work and executed with a group of older women around 1943. Around this time, while working at a factory, Sala's hand was caught in one of the machines and badly wounded. She was sent to recover in an infirmary but caught wind that it was going to be liquidated and friends helped her dig a hole in the ground at the border of the camp where she hid covered by dirt and snow. Her friends risked their lives daily to bring her small pieces of bread and when she healed enough to return to work, the same friends helped her blend back in with the other inmates to avoid detection by the Germans.

Shortly after that, Sala was transported by cattle car to Auschwitz-Birkenau, where she recalled seeing a giant chimney with plumes of smoke billowing out. When she asked one of the guards what that was, he replied "that's you people burning." Sala had a heart condition resulting from a childhood illness so she was small for her age and at this point emaciated. Nevertheless, she was somehow waved to the right during selection by the notorious doctor Josef Mengele, to live and work, and was branded with a number on her arm. She credited her survival in part to a group of Jewish women who helped each other, sharing the little food they had and caring for one another when they were sick. When Sala visited some of these friends in Israel for the first time after the war, they showered her with bits of bread in celebration. After about a year there, Sala was taken on a march to Bergen Belsen, where she was liberated in April 1945 by British and American troops. She weighed just 49 pounds, was covered in lice and sores, and had contracted typhus.

With the help of an uncle in Canada who sponsored them, Avrum, Sala and Lilli emigrated to Toronto in 1948. Avrum worked long hours in a sweatshop and he and Sala taught themselves English by reading newspapers and listening to the radio until they could open their own dry cleaning and clothing store, Arlington Cleaners. They founded the Radomer Society and Shul with fellow survivors, participated in many community organizations, including Hadassah, and helped other Jewish refugees establish new lives in Canada. Avrum traded soccer for his new passion of hockey, and became a fanatical Leafs fan. Sala loved traveling and playing cards. She maintained lifelong friendships with her "cousins" as she called the women who took care of each other in the camps.