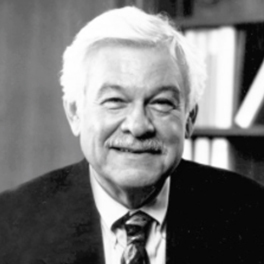 Dr. Gustav Schonfeld was born in Munkács, Czechoslovakia on May 8, 1934. In 1938, the Nazis began turning over land annexed in the region to its Hungarian allies. Over the next few years, the Hungarian government instituted anti-Jewish legislation and racial laws before officially joining the Axis Powers. In March 1944, after Hungary tried to withdraw from its alliance with Germany following several crushing military defeats, the Germans responded by invading Hungary. At this point, the liquidation of the area's Jewish population began.

In April, just after Passover, when Gustav was 10 years old, he and his family were taken to the Munkács ghetto, housed in a former brick factory. In The following month, they were among the nearly 30,000 Jews from the region transported to Auschwitz in deportations between May 11 and May 23. Some people died on the three-day journey to Auschwitz, crammed into cattle cars without food, water or toilets. There, Gustav and his father, Alexandor, were separated from his mother, Helena, grandmother, Irene Gottesman, and infant brother, Solomon. (Another brother, Alfred, known as "Freddy," died of kidney disease before the war.)

Gustav credited his survival to his father, who told him to pretend he was 16 years old and continually risked his own life to protect his son. After some time at Auschwitz, they were taken to clear the ruins of the Warsaw Ghetto, then on a death march to the Dachau concentration camp and finally transferred to Muhldorf Waldlager, a sub-camp of Dachau near the town of Ampfing, Germany, where they were liberated on May 2, 1944. They spent the next six weeks recuperating in a nearby convent.

After the war, they were reunited with Helena, who initially survived by giving the baby to her mother and telling the guards that she was a nurse, and subsequently was transferred to several other camps in Poland. However, Gustav's grandmother and six-month-old brother were killed immediately upon arrival at Auschwitz, half of his extended family perished, and he was the sole survivor of his cheder class of 30 boys.

In 1946, the family emigrated to the United States and settled in St. Louis to be near relatives. Gustavs uncles on both sides had emigrated there before the war, and his father's older brother's daughter ended up marrying his mother's brother.

Gustav's father had been a physician in Europe and, with great determination and effort, he regained his medical credentials and established a successful medical practice. Gustav went on to become a physician like his father and served on the faculty of Washington University School of Medicine for 40 years. He directed the Lipid Research Center, served as Chair of Preventative Medicine and the Department of Internal Medicine, and as Physician in Chief at Barnes-Jewish Hospital. A world renowned expert on cholesterol and heart disease and a prolific author, his research appeared in hundreds of scientific publications. In 2009, Gustav wrote a book about his experiences, Absence of Closure. He passed away on May 21, 2011, just one week before his 50th anniversary with his wife Miriam. They had three children together, Josh, Julia and Jeremy, and eight grandchildren.