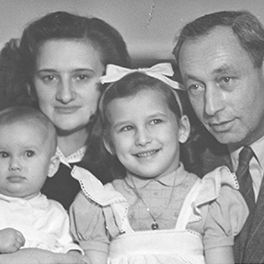 Edith Mayer Michaely was born in Bratislava (Pozsony in Hungarian), in what was then Czehoslovakia, on October 19, 1926 to Tereza Taube (née Gunzberg) and Leo Lieb Arie Mayer. (The area was previously part of Hungary and would become Hungarian territory again in November 1938 when Hungary's government formed an alliance with Germany). Edith and her older sister Alice were raised in a modern Neolog Jewish home, the Hungarian equivalent to the Reform movement in Germany, and attended a German-language Jewish day school.

After her debonair father lost the family's shoe department store in a poker game one night in 1935,, the family relocated to Cluj, Romania, to start life anew. This move was to be the first of many for resilient, nine-year-old Edith. Within a month she mastered the Romanian language so well that she was able to help her older sister with her schoolwork.

Just before the ominous clouds of World War II descended on that part of Europe, Edith volunteered to travel to Budapest, Hungary to help an ailing relative with her young children. Since Hungary initially allied itself with Germany, the Nazis did not occupy the country until March 1944. In October 1944, the Hungarian Arrow Cross party came to power and, with a National Socialist ideology similar to the Nazi party, began systematically persecuting the country's Jewish citizens.

Unable to return home, Edith was among the 70,000 Jews rounded up and confined to the Budapest Ghetto. It was during this time that Edith's strong survival instincts, cunning and resilience began to surface, as she mended silk stockings to earn money for food and other staples for the family. She also helped out in a dentist office and actually pulled out a tooth for a patient one time when the dentist was not available. Thousands of Jews were murdered on the banks of the Danube river and over 2,000 who died from starvation and cold in the ghetto were buried in the courtyard of the Dohany Street Synagogue.

On Edith's 18th birthday, she was among the thousands of Jews who were to be deported on one of the last transports, to Auschwitz. But with the Allies already bombing the railroads, they were instead forced on a death march without food in the dead of winter to Lichtenwörth, a town near Wiener Neustadt in Austria, where they were prisoners in a little-known concentration and slave labor camp.

Despite insurmountable hunger, the cement floor that served as her bed, and freezing temperatures, Edith washed her stockings every day by rubbing a frozen pipe with her bare hands. She explained that if she stayed clean in this impossible situation, she could stay alive. This fierce desire to live was a hallmark of her character.

Less than 200 of the deportees on that transport survived by the time they were liberated by Russian troops on May 25, 1945. Edith was the sole survivor of her nuclear family.

Several years after the war ended, Edith married Itzhak Michaely, 17 years her senior. They had two daughters and eventually emigrated to Israel and then to Florida, where Itzhak had a brother. They later settled in New York where they owned a grocery store and then a lingerie store on Queens Boulevard called Bare Essentials. Edith lived to see five grandchildren and eight great grandchildren, who lovingly knew her as "Safta."

Holocaust Testimony from the Fortunoff Video Archive at Yale University