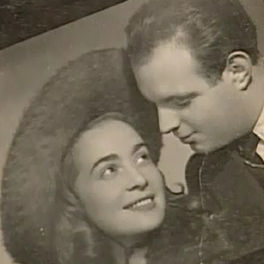 Edward Insler Wizmur was born as Myeteck Insler in Poland in 192. During World War II, Edward, his parents and younger brother obtained false papers from several families allowing them to live as Christians during the War. Edward's family name was Insler, but he adopted the name Wizmur to hide his true identity as a Jew.

As his family scrambled from one hiding place to another, Edward, still a teenager, managed to find food for them and to help them avoid encounters with hostile elements. When the family finally arrived in Budapest, Edward worked with the Hungarian underground resistance, dressing up as a Nazi soldier, showing up at Jewish apartments and directing the Jews in those apartments to safety.

Edward married Maria, and their child, Leonard, was born in 1946 in Budapest. They left Hungary in 1948, and remained in Munich, Germany until 1952, when they were able to emigrate to the United States. Edward passed from a heart attack in 1967.