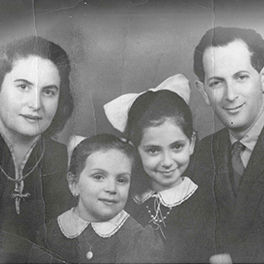 Elisabeth Fischer was born on December 28, 1926 in Lechinta, Romania (also known by its Hungarian name, Szaszlekence), to Marton and Margaret (née Stiglitz, also known as Mirus) Markovitz. She had two younger brothers, Kalmen and Mates, born in 1928 and 1934, after the family moved to nearby Dӑmӑcuşeni (Domokos in Hungarian) in the town of Târgu Lӑpuș (Magyarlápos in Hungarian). Both villages were in the Northern Transylvanian region that was under Hungarian rule and Nazi Occupation during the Holocaust.

According to the 1993 application she filed with the Claims Conference Article 2 Fund, Elisabeth was forced to wear a Jewish star beginning on March 9, 1944, the day on which the holiday of Purim fell that year. On May 3, her family was among the 7,800 Jews from the area taken to a ghetto in the woods of the Bungur Forest, located about two miles from the city of Dej. Sanitary conditions in the ghetto, which was surrounded by barbed wire, were miserable, with people sleeping outdoors in makeshift tents, and no access to water, toilets or medical services. Three weeks later, on May 24, Elisabeth and her family were transported in cramped cattle cars on a three-day journey to Auschwitz, arriving on May 27, the eve of Shavuot. There, she was separated from her mother and younger brothers, who were sent directly to the gas chambers. Although her father survived the initial selection, based on accounts of several people who had been with him in the camps, it is believed that he died of typhus just after liberation. The members of her immediate family are among those listed in the Yizkor Book created after the Holocaust for Martyrs of Magyarlápos and surroundings. As a young single woman with no children, Elisabeth was selected for work at Auschwitz, where she resided in Lager C, Block 29.

In October 1944, Elisabeth was transferred to the Flossenbürg concentration camp in Bavaria, Germany, near the border with Czechoslovakia, among thousands of Jews evacuated from Auschwitz between the summer of 1944 and winter of 1945. There, as Hӓftling Nr. 56088, she performed slave labor in two of its approximately 90 sub-camps: She was one of 550 prisoners who worked in the Siemens factory at Nürnberg, which produced electronic equipment, until it was closed following heavy bombing. She subsequently was transferred to the sub-camp at Holleischen from March until her liberation by Allied troops on May 5, 1945.

In June 1945, Elisabeth returned home and found that she was alone in the world, except for several first cousins. She lived with fellow survivors in their teens and 20s, most of whom paired up and married in casual joint wedding ceremonies. On March 15, 1946, Elisabeth married Emanual, who survived the war as a slave laborer for the Hungarian army.

We do not know many details of Emanuel's experiences before or during the Holocaust as they were not recorded before his death in 1976 at the age of 53. His mother Fraidel (née Rubin) died when he was a young child and he was raised by his father before being sent away to study the fur trade in another town. He had one younger sister, Kayla, who perished in the Holocaust. A photo of the Rubin family in Dej circa 1910 shows Emanuel's maternal grandparents dressed in traditional garb surrounded by their seven children; the younger ones are similarly dressed more traditionally while the older boys don modern clothing. These young men had traveled to Paris, where they would later return and be joined by their two remaining sisters, Jeanette and Shari. Except for Jeanette, all of Fraidel's brother and sisters, as well as their their spouses and children, perished during the Holocaust. They were among the many foreign-born Jews in france deported to Auschwitz over 80 convoys. As Nazi hunter Serge Klarsfeld noted in his landmark book "Memorial to the Jews Deported from France, 1942-1944," France was so hospitable to Jewish refugees at the time that, of the 350,000 Jews living in France when the Germans invaded in 1940, significantly more than half were from other countries. The book, which includes a list in alphabetical order of the nearly 76,000 deported Jews, includes 2,958 from Romania. The vast majority of Jews with French citizenship survived the Holocaust, reflecting how French officials met German quotes with foreign or stateless Jews. According to the Wall of Names at the Mémorial de la Shoah in Paris, only about 2,500 of all those deported survived.

Elisabeth and Emanuel had two children together, Miriam and Clara. In June 1962, the family emigrated to Paris, where they were reunited with the only other surviving member of Mendel's family, his aunt Jeanette, who had moved to Paris in the 1920s, where she met her husband Deju Spitz, a fellow refugee from Hungary, and was a partisan in the French Resistance during the Holocaust. They stayed there for eight months before emigrating to America with the help of the Hebrew Immigrant Aid Society (HIAS), taking a train from Paris to Belgium and then a Sabena airline flight to New York on February 5, 1963. There, they settled in the Boro Park section of Brooklyn, among many other survivors from Transylvania. Both Miriam and Clara married sons of survivors from that region who were only children. They raised their own children as one tight-knit family, celebrating every holiday together. From these two daughters of the sole survivors of the Markovits and Fischer families came six grandchildren and 18 great grandchildren, including Heschel students Sophie, Elizabeth and Henry Fisher.