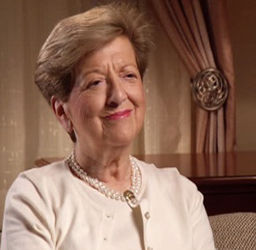 Elisabeth Citrom was born in 1931 to Leopold and Malvina Schreiber in a Romanian town called Târgu Mureș. She and her brother Isidor were raised in a traditional Jewish home and enjoyed a pleasant childhood until the Hungarian occupation of Transylvania in August 1940. The Nazi-aligned Hungarian government gradually imposed more restrictions on the Jewish population. Her father, a lawyer, was no longer allowed to practice and around the same time that the family's home was requisitioned, two uncles who ran the farm of Elisabeth's maternal grandmother Bluma Salomon in the nearby village of Troița were conscripted for forced labor. So Elisabeth's family moved there to live and help manage the estate.

In May 1944, Hungarian gendarmes rounded up the Jews and took them to a makeshift ghetto in a brick factory in Elisabeth's hometown. They stayed there for a few weeks before being deported to Auschwitz in cattle cars. There, Elisabeth was separated from her family. She later learned that her mother and grandmother were sent to their deaths in the gas chambers, and would be reunited with her father and brother five years after liberation. Only 12 years old at the time, Elisabeth somehow survived numerous close calls with death, as did her aunt Jolanda Schreiber, who she found at Auschwitz. Jolanda was pregnant when deported and gave birth at Auschwitz; the baby was immediately taken from her and killed. The two managed to stay together through their transfer in the winter of 1945 to a labor detail near Hamburg, Germany, and on a march through the snow to the Lenzing concentration camp, a subcamp of Mauthausen where prisoners worked in a textile factory. They were liberated from there by American troops in May 1945.

Elisabeth was so sick from her experiences that she remained in a nearby hospital for eight months before returning home. In 1947, she was among thousands of refugees who tried to reach Palestine on the Pan York ship but was caught by the British and interned on Cyprus for several months. There she met her future husband Georg, also a survivor. In early 1948 she was allowed entry into Palestine under an orphan quota. There she experienced the independence of the state of Israel, served in the Israeli Defense Forces, helped found Kibbutz Nir Eliahu outside Kfar Saba and became a registered nurse.

In 1956, Elisabeth and Georg visited Sweden, where her father had settled following his liberation from Bergen Belsen in 1945, and they ended up staying there. Elisabeth worked in nursing and counseling for over 30 years with an emphasis on children with special needs. She has held numerous leadership roles in organizations supporting Jewish life and Israel, including Keren Hayesod - the United Israel Appeal. Elisabeth has spoken about the Shoah and tolerance to many organizations, schools and churches. She lived with her husband Georg and traveled with him between their homes in Stockholm, Sweden, and Kfar Saba, Israel, until his death in 2017.

Elisabeth and Georg had two children together, Evelyn and Joel, as well as six grandchildren: Daniel, Jonathan and Avigael Giron, and Heschel graduates Tobias, Maya and Clara Citron.