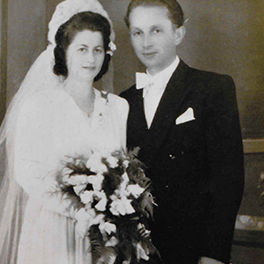 This is the remarkable love story of Esther and Saul Hirsh, survivors of the Holocaust from Seredne, Czechoslovakia who were reunited after liberation and married in Prague on July 27, 1946. Saul was born on June 8, 1911, the middle of three children to Sarah Bergida and Yakov Hershkowitz. (He later changed his family name to Hirsh.) Esther was born on December 30, 1919, the youngest of nine children to Sarah Klein and Shimon Hershkowitz (no relation).

The two became engaged around the time that stories began to spread about Nazi persecution of Jews in Poland. The Jews in their neighboring towns, Hluboka and Solotvyno, still felt far removed until 1941, when orders came for the Jewish men in the region to be rounded up and taken to Nazi labor camps. Esther's father refused to let her marry Saul before his departure because he didn't want her left back at home with an uncertain future like her older sister Ruchel, whose husband, Erno, had already been taken away, leaving her to raise their infant daughter Yehudit on her own. Sporadic letters from the men describing horrific conditions reached the town. Saul almost died in the labor camps from typhus and rheumatic fever. Esther and Ruchel dismissed their parents' pleas to flee to Budapest or America, where they had two uncles, Adolph and Jacob Klein, living in Pennsylvania and two older brothers, Frank and Nathan, in New Jersey.

In April 1944, as the family was preparing for Passover, the Nazi army marched into their towns and began mass roundups of Jews. Esther, along with her parents, sister and three-year-old niece, were placed in the Uzhgorod ghetto. After living there for several weeks under difficult conditions, they were deported to Auschwitz. While lined up for Joseph Mengele's notorious selection, Esther's mother Sarah noticed how the younger, able bodied women and men without children were being sent to one side while older people and those with young children were being sent to the other. She pleaded with Ruchel to give her Yehudit, but Ruchel vehemently refused. This was the last time that Esther saw her mother, father, sister and niece.

Esther, then 25 years old, was determined to live. She also credits her survival to the fact that she did kitchen work in the camps. She was later transferred from Auschwitz to the Buchenwald concentration camp in Germany, where she did slave labor in various sub-camps until early April 1945, when the Nazis began a mass evacuation as American forces approached. Esther was among the prisoners taken on a forced death march just a few days before the camp was liberated. On May 11th, while still marching away from the advancing allies, the Nazi guards fled and Esther was liberated by Soviet troops.

Hoping to find other surviving members of her family, Esther was directed to a Red Cross center in Prague where, miraculously, she ran into her brother Yankle (Jack), who had enlisted in the Czech army, and received a letter from Esther's fiance Saul inquiring about her. Saul's older brother Sam (Shmuel) also survived but his wife, Raizel, and three sons were murdered, as was their younger sister Hensha, her husband and three children.

one niece, Elsie (Etu), and her two brothers, Alan (Ali) and Leslie (Luci). They were the children of Esther's sister Sheindel and her husband Nandor Braun, who perished in the Holocaust. Two other nephews, William (Bela) and Nathan (Bumi) the sons of Esther's sister Faiga and her husband Tividor Weinberger, also survived and reunited with the family but their younger brother Alexander (Shonie) perished along with their parents. Esther's other siblings who remained in Europe during the Holocaust, Yisrael and Golda, also perished.

Esther and Saul were able to emigrate to America the following year after being sponsored by their mother's two older brothers who had lived in the U.S. since the 1920s. In early 1946, Esther was seven months pregnant when she and Saul boarded the S.S Drottningham of the Svenska, America Line for their voyage to America.

When they arrived in New York City two weeks later, Esther searched the crowds for a familiar face but did not recognize her oldest brother Frank, tears streaming down his face at the sight of his only surviving sister, since he had emigrated to America when she was a little girl. However, standing by his side was his son Irving, whom Esther recognized from a Bar Mitzvah photo that had been mailed to her. Esther's brother Jack, Saul's brother Sam, and the couple's surviving nieces and nephews arrived in America shortly afterwards.

The memories and legacies of the many Hirsh relatives murdered during the Holocaust live on through their families, including six Heschel students who are the great grandchildren of Esther and Saul Hirsh: Abby, Sophie, Eliza, Elizabeth, Sam & Henry Fisher.