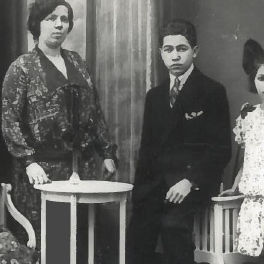 Jakob Jenö Grunwald was born in Amsterdam on January 19, 1940, less than four months before the German occupation of Holland. His father, Andor, had fled from Hungary to Holland in the early 1930s with his mother, Betti, and three sisters, Ilona, Lenke and Kornelia. There he met Jakob's mother, Rachel Sealtiel, who was a Dutch citizen. They were married in 1937 and had four children.

Jakob, their second child, was almost three years old when his parents were rounded up by German officers and Dutch collaborators. Jakob and his siblings, Alida Mathilda, Edith Esther and Paul Mordechai, survived the war in hiding but most of their extended family perished in the Holocaust, including their parents, aunts, uncles, cousins and grandparents. Jakob later learned that his parents were gassed to death at the Sobibor extermination camp in Poland on April 23, 1943, after almost a year at the Dutch concentration camp Westerbork. His paternal grandmother and her second husband, Leser Israel, were murdered at Auschwitz on November 5, 1942 (his grandfather, Jacques, had previously passed away) and his mother's twin sister, Frederika, along with her husband David Goudsmit and their three children, were killed at Sobibor on June 11, 1943.

Jakob was saved because he was taken in by strangers, who first hid him in Haarlem, a town west of Amsterdam for a few weeks. He was then taken by strangers to another town in a more central part of Holland called Gorkum, where he was sheltered by a childless, Calvanist couple in their late forties.

Jakob later recalled the couple's strict Calvinist dogma and the shame they instilled in him for his Jewish heritage. The only objects he carried with him were half a picture of himself and a doll; his father, who never returned, kept the other half of the photo to identify him after the war, and the doll was taken away from him by his foster parents, who raised him in an environment of fear and intimidation and taught him that affection was sinful in Dutch Calvinism. They intended for him to become a missionary among the Jews.

Nevertheless, after the war, through the better part of the 1950s, Jakob was required to go to the local immigration office every six months to obtain the necessary permit to remain in Holland as a stateless Jew. In his late teens, after suffering years of humiliation in all realms of life, Jakob decided to leave Holland. Lacking the requisite papers, he illegally crossed the border into Germany, Denmark and finally Sweden, where he was welcomed and became a citizen in 1965.

As he recalled in a statement to the Interior and Insular Affairs subcommittee of the United States House of Representatives on February 5, 1992:

"I finally became a legitimate son of Mother Earth, a right that the Dutch government denied me along with my birth certificate. For 25 years, the policy of the government of Holland denied me of citizenship and the rights of citizenship that belong to all Christian children born of similar parents, simply because I was a Jew."

He further explained that it took him some fifty years and considerable efforts to obtain the few facts he has about his parents and early childhood.

In Sweden, Jakob earned his first Engineering degree and developed technology which resulted in patents that were sold to the American Company in Pennsylvania where he would subsequently work. This brought him to the United States in 1970, where the government granted him the status of Permanent Resident. He continued his graduate studies and post-graduate research in Engineering and Science at the University of Pennsylvania, and became a U.S. citizen on June 14, 1978. Jakob went on to found a computer technology company that continues to develop and market a new approach to parallel processing.