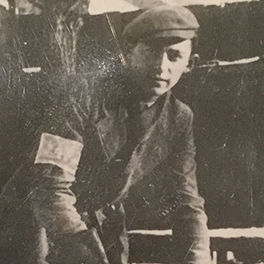 Martin (Moshe) Fishbein was born in Ulanow, Poland on December 29, 1921. When the Nazis invaded Martin's town, they sent his mother, Hinda Ruchel Hackel, and sister, Yachet, to their deaths at Belzec, along with his extended family. Martin was deported to 12 camps: Narol, Budzyn, Mielec, Janiszow, Reichshof-PZL and Krakau-Plaszow (from which Oskar Schindler recruited most of his Jewish workers), all in Poland; Wesserling in France; and Flossenbürg, Ravensbrück, Watenstedt-Braunschweig, and Wöbbelin, in Germany. During that time he performed slave labor for German companies including J.A. Henckels.

Martin was liberated from Wöbbelin by Canadian and U.S. forces on May 2, 1945. He spent nearly a year at the Cremona displaced persons camp in Italy, where he played soccer, developed a taste for opera and espresso, and ardently participated in the Beitar movement founded by his hero, Ze'ev Jabotinsky. Martin then travelled by ship to the United States to join his father and two older sisters,who had emigrated to New York before the war. He arrived on March 18, 1946.

There he reunited with his childhood sweetheart, Adele Kofman, who had fled to Siberia during the war. They married in 1951 and had two children, Cheryl and Susan. Martin passed away on January 15, 2015. He is the grandfather of Heschel parent Jennifer (Fishbein) Rak and the great-grandfather of Heschel students Noémie Adelia and Léa Paule Rak.