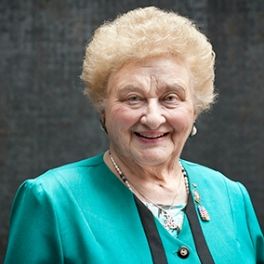 Nesse Godin
Nesse Galperin was born on March 28, 1928, into an observant Jewish family in Siauliai, Lithuania. Her mother, Sara, owned a dairy store and her father, Pinchas, worked at a shoe factory. They spoke often to Nesse and her brothers, Jecheskel and Menashe, about the importance of community and caring for others. Siauliai was home to a Jewish community of more than 10,000 members, who supported cultural and social organizations and over a dozen synagogues.

The Nazis Invade
On June 26, 1941, Nazi Germany occupied Siauliai and almost immediately put into effect antisemitic laws, including requiring all members of the Jewish community to wear a yellow Star of David. Jewish children were prohibited from attending school, and Jewish businesses were confiscated. In the weeks that followed, Einsatzgruppen (mobile killing units) and Lithuanian police and military officials rounded up 1,000 Jewish men and boys under the pretense of cleaning up the damage done to the city by the occupation. Instead, they took the Jewish men and boys to the nearby Kuziai Forest, where they forced them to dig large pits before telling them to take off their clothes. They then shot the men and boys and buried their bodies in the pits.

In August 1941, Nesse and her family were forced to move into the Siauliai ghetto. On November 5, 1943, approximately 1,700 people—including Nesse's father, Pinchas, and 1,000 children--were deported to Auschwitz and killed in the gas chambers. Nesse, her mother, and her brothers managed to avoid the selection because they were at work outside the ghetto. In 1944, the few Jews remaining in the Siauliai ghetto were deported to the Stutthof concentration camp. Nesse became prisoner number 54015 and was separated from her mother and brother Jecheskel. Her other brother, Menashe, evaded deportation with the help of a gentile friend.