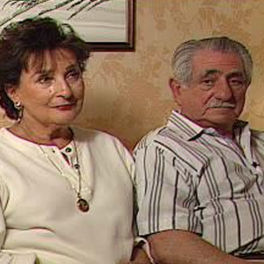 Rena Rosenbaum was born to a privileged, secular Jewish family in Kozienice, Poland in 1926. She was the fourth of four daughters and had a younger brother. She attended school with gentile children and faced little anti-Semitism as a child, though does recall her next oldest sister Sala beating up a girl who had used the term 'dirty Jew' about an acquaintance of theirs. When Poland was invaded by the Nazis, their lives became more restricted, though they were somewhat protected by her father Sam's standing in the community and, more importantly, his brick factory that was needed for the German war effort.

A year or so later, they were moved to the ghetto to an apartment that abutted the border wall. Sam's employees were fiercely loyal to him and smuggled in food and clothing for the family. When it became clear that the ghetto was merely a waystation to greater terrors, these same employees procured false papers for the family and organized safe houses for them to begin lives with Gentile Polish identities. Rena was the first to leave, sent to Warsaw to work as a mother's helper with the name Leokadia Hania Kocidlek (Ann).

While in Warsaw, she attended Catholic Church regularly. One day she was out shopping and a friend from home recognized her by her pink angora hat. Terrified that her cover was blown, she rushed to an apartment where her sister's boyfriend Benny was hiding. The other people who were hiding rejected her but Benny shamed them, admonishing them for condemning a young girl to death. They finally relented and there she stayed until another safe house was found. She was later arrested, as a Pole, along with this next family for the crime of hiding Jews. She was sent without proper shoes or a coat to Pawiak Prison, at the border of the Warsaw Ghetto.

While in Pawiak, she was noticed by a man she assumed was a gypsy while walking in the exercise yard. He came to her several times and said, "There is many like us." Rena finally realized he was Jewish and knew that she was as well. She admitted that she was a Jew and asked that he contact her family at the end of the war. He made her warm boots and used his position of privilege with the guards to give her as much comfort as he could, including putting her file at the bottom of the pile marked for deportation.

She was ultimately deported and sent first to one labor camp and then to Ravensbruk where she befriended a gentile woman. Each one would forgo her bread each week to obtain hot water; they then shared the water to wash their hair and shared the remaining food. She remained friends with this woman after they were liberated and after confessing her true name and identity.

After the war, on the way home, Rena met a man who asked about her experiences. When she told him she had been in Pawiak, the man said, "Oh you must know Max! He is madly in love with this girl Ann and wants to find her." Shocked, she told the man that she was Ann and gave him her true family name and address. Soon after, after arriving home to find her family intact save for her mother and brother, Max came to the house. He met her family and then promised to return in three. The three weeks came and went and he did not reappear. It turned out Max had been in a serious car accident and was in traction for weeks. Meanwhile Rena went to have a watch repaired and caught the eye of the man who would be my grandfather Sam Gutstadt. By the time Max was able to return, still on crutches, Rena was married.

Sam and Rena moved to Stuttgart, fearing violence from the Poles. Sam's brother was murdered in a robbery soon after the war. Later they emigrated to the US with their 2 year old son in tow and my mother in utero. They lived in Brighton Beach, Brooklyn for seven years before settling in Toronto, Canada. Through the small survivor community, they were reacquainted with Max and his wife Halina. They socialized in Florida and attended each other's childrens' weddings.

Sam and Halina died young, leaving their respective spouses lonely and looking for companionship. Max and Rena rekindled their friendship and then courtship, marrying on June 12, 1988. The two families and eight grandchildren became one, and they celebrated the birth of fourteen great-grandchildren. The love affair ended finally on December 25, 2016, when Max passed away.