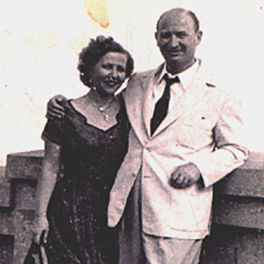 Simon Gerstel as born on December 14, 1932 in Antwerp, Belgium, to Arnost and Charlotte Gerstel. Arnost was born on December 24, 1904 in what was then Czechoslovakia. He moved to Paris and later Vienna, where he became a watchmaker, and then to Hungary where he initially met Simon's mother, Charlotte Badler, who was born there on September 21, 1909.

Simon's parents were later reunited in Strasbourg, France, when both of their families moved there seeking a place where Jews could enjoy greater freedom. They ultimately found their way to Belgium in 1929, where they married and Arnost began working as a diamond merchant. Apparently, he was a terrible watchmaker; rumor had it that every timepiece he touched never worked again.

In the spring of 1940, German forces continued their expansion into Western Europe, invading Luxembourg, the Netherlands and Belgium on May 10th. After 18 days of fighting, Belgium surrendered and the Germans immediately instituted anti-Jewish laws.

At the outbreak of World War Two, about 90,00 Jews lived in Belgium. As documented by Mark Weber in the Journal of Historical Review, most were not Belgian citizens and many were recently-arrived refugees from Germany, Austria and Poland. The vast majority of them were concentrated in Brussels, the capital, and Antwerp, a major seaport. About three-fourths were self employed and the the local diamond trade was largely in Jewish hands. In the aftermath of the German occupation, many thousands of Jews fled the country or were deported to France so that by late 1940 only around 50,000 remained.

By September 1941, Jews were required to wear the yellow star and carry identity cards marking them as "JOOD-JUIF." In August 1941, Arnost was arrested by the Gestapo at the Fortunia, one of four main diamond trading clubs on Pelikaanstraat, for "failure to declare jewels." They confiscated approximately 90 rings from him, assessed additional fines and released him after serving three weeks in prison. A stranger approached Arnost after he was set free and encouraged him to leave Antwerp because he had reason to believe the Jews of the city would be subject to further arrests. Before fleeing Belgium, Arnost went to a shoemaker and had him sew diamonds into the heels of his son's and wife's shoes so that they would have some assets to finance their escape.

Simon, then 10, and his parents took a train to France, leaving behind Charlotte's brothers, Joseph, Maurice and Lotzy, and sister, Janka, who stayed back to tend to the family's tailoring business. With the help of the French Resistance, the Gerstels were taken by smugglers from the island of Corsica through occupied France into the free zone. They first went to Marseille, where relatives of the Lubavitcher Rebbe helped them obtain false identification papers. They then travelled on to Nice, where they boarded a ship that sailed to Casablanca, where the Moroccan government placed them an internment camp in Aïn Sebaâ, northeast of the city.

On January 26, 1942, the family boarded the S.S. Serpa Pinto, a Portuguese vessel bound for the United States. Approximately 1500 Jewish refugees took the journey on a ship with a maximum capacity of 600, lasting over three weeks. When the ship approached the U.S. it was turned away and made a stop in Kingston, Jamaica before porting in Havana, Cuba, where the passengers were interned in a camp called Tiscornia. During the family's time there, Simon celebrated his Bar Mitzvah and joined the Zionist youth movements of Agudath Israel, the Mizrachi and Betar.

In 1945, the Gerstels were informed that Charlotte's brothers Maurice and Lotzie had survived the Auschwitz and Buchenwald concentration camps. Charlotte's other brother, Joseph, her sister Yanka and her two young children as well as Maurice's wife and two young children perished during the Holocaust. After reuniting with their surviving relatives, the Gerstels left Cuba 1946, making their way to New York City via Miami.