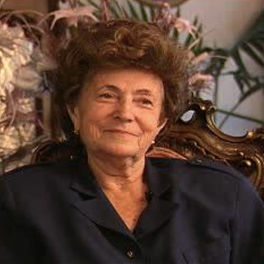 Sylvia Rosenfeld, née Friedman, was born in Gherla, Romania, on October 13, 1924, in the Northern Transylvania region that was under Hungarian rule and German occupation during World War II. On May 3, 1944, she was taken along with her mother, Regina, father, Herman, sister, Lea and two brothers, Jakob and Bumi, to the local brickyard ghetto in Gherla (Szamosújvár in Hungarian) with some 1,600 Jews. On May 18th, they were transferred to the ghetto in Cluj (Koloszvár in Hungarian), where they were confined to the Iris Brickyard with approximately 18,000 Jews from the area. One week later, they were transported in cramped cattle cars on a three-day journey to Auschwitz where they arrived on May 27th, the eve of the Jewish holiday of Shavuot.

At Auschwitz, Sylvia's elderly parents and younger sister Lea were immediately selected for extermination in the gas chambers. Although her older brother Jakob was kept among the stronger, able-bodied male prisoners, only Sylvia and her younger brother Bumi ultimately survived. In October 1944, Sylvia was among the 1,000 female prisoners transferred by train to one of the sub-camps of Gross-Rosen, a concentration camp in Western Poland, where living conditions were horribly unsanitary and the women were subjected to forced labor digging trenches in the cold with flimsy clothing and little food.

In January 1945, as the Russian army approached, the Nazis evacuated the camp and took the women on a forced death march that lasted more than three months and covered roughly 500 miles. Moving in a southwest direction and adding women from other camps along the way, the march finally ended in the town of Volary in Czechoslovakia in May 1945, with only approximately 350 of 1300 women surviving.

When she returned home, she married Martin Rosenfeld, a fellow survivor, whose first wife and son were murdered at Auschwitz. They had one son together, Ervin. In December 1964, the Rosenfeld emigrated from Romania, first traveling by train to Italy, where they stayed for almost two years.

In December 1966, with the help of the Hebrew Immigrant Aid Society (HIAS), the Rosenfelds emigrated to America. There they lived in the Boro Park neighborhood of Brooklyn among many other Holocaust survivors and established a richer and more secure Jewish life for their family.

Postcrypt: In the spring of 2016, a monument was erected in Gherla to memorialize the martyrs of the Holocaust from that region. Etched among the names in the stones are those of Regina, Herman, Jakob and Lea Friedman.

Ervin Rosenfeld, the son of Sylvia and Martin, married Clara Fischer, also the child of Holocaust survivors from Romania, whose family had emigrated to Brooklyn in 1963 with the help of HIAS. They had three daughters, the oldest being Heschel parent and Holocaust Commemoration Committee member Jeannie Rosenfeld Fisher, and have seven grandchildren, including Heschel students Sophie, Elizabeth and Henry Fisher.