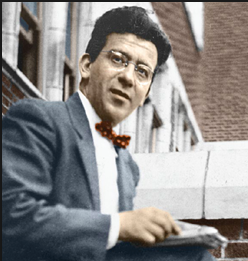 Abraham Joshua Heschel was born on January 11, 1907 in Warsaw, Poland, the youngest of six children to Moshe Mordechai and Reizel (née Perlow) Heschel. A descendent of preeminent Hasidic rabbis on both sides of his family, Heschel would become one of the leading Jewish theologians of the 20th century. Although Heschel escaped the Nazis, his mother and three of his four sisters, along with numerous members of his extended family and countless friends and colleagues, perished in the Holocaust. (His father died of influenza in 1916, when he was nine years old.)
After a traditional yeshiva education and secular studies at a gymnasium in Vilna, Heschel attended the Friedrich Wilhelm University, today’s Humboldt University, in Berlin and, simultaneously, pursued rabbinic ordination at the Hochschule für die Wissenschaft des Judentums. Just three weeks after Hitler came to power, he took oral examinations for his doctorate at the University of Berlin. Heschel stayed in the city, teaching at the Hochschule and also at the Jüdisches Lehrhaus. He witnessed the burning of the Reichstag in March, as well as a book burning in a large open square in the middle of the University of Berlin in April. His disgust at what he witnessed was expressed in a Yiddish poem, “A Day of Hatred,” which he anonymously published in a Warsaw newspaper. Heschel even recounted how Hitler once abruptly arrived at a concert he attended in Berlin and everyone in attendance rose; he left the venue as quickly as possible.

In October 1938, while living in a rented room in the home of a Jewish family in Frankfurt, Heschel was arrested and deported along with other Jews living in Germany but holding Polish passports. As his daughter Susannah Heschel recounts in the introduction to Moral Grandeur and Spiritual Audacity, a collection of his essays: “Suddenly, in the middle of the night, the Gestapo arrived and gave him one hour to pack. He quickly gathered his manuscripts and books and then carried two very heavy suitcases through the streets of Frankfurt to police headquarters, where he was held overnight in a tiny cell. The next morning he was put on a train packed with deported Jews. He had to stand for the duration of a three-day journey. Denied entry into Poland, the Jews were held at the border in miserable conditions, many remaining for months. The local Poles refused to give the Jews food. My father was fortunate: his family soon secured his release, and he joined them in Warsaw.

After 10 months teaching at Warsaw’s Institute for Jewish Study, Heschel fled to London six weeks before the German invasion of Poland thanks to a visa obtained for him by Julian Morgenstern, President of Hebrew Union College (HUC) in Cincinnati, Ohio, who worked tirelessly to secure visas from the U.S. State Department to bring Jewish scholars out of Europe. Ultimately, he was only granted visas for eight of these refugees, collectively known as “The Jewish College in Exile.” For six months, Heschel stayed in London, where his brother Jacob, was serving as Rabbi to an Orthodox congregation. In January 1940, Heschel finally received his American visa, and he arrived in New York that March, staying with family until he moved to Cincinnati.

In Cincinnati, Heschel met his wife Sylvia Straus, a concert pianist, but it was a difficult five years there because of his failed attempts to save his relatives and friends stranded in Europe. When the Nazis invaded Poland, his sister Esther was killed in a bombing. His mother and sister Gittel had to abandon their apartment and ultimately both died, the former while still in Warsaw, the latter most likely in Treblinka. Another sister, Devorah, who was married and living in Vienna, was deported to Thereisenstadt on October 2, 1942, and from there to Auschwitz, where she was murdered upon arrival on May 16, 1944. The only other survivor from his immediate family besides his brother, Jacob, who had left Vienna in 1939 with his wife Susie and daughter Thena, was his sister Sarah, who had emigrated from Vienna to New York in February 1939 with her husband, the Kapitshinitzer Rebbe, and their children. Heschel never returned to Germany, Poland or Austria, explaining, “If I should go...every stone, every tree would remind me of contempt, hatred, murder, of children killed, of mothers burned alive, of human beings asphyxiated.”

He married Sylvia in 1946, the same year he took a position at the Jewish Theological Seminary (JTS) in New York, and in the first decade of their marriage, completed his most important works including Man is not Alone (1951), The Sabbath (1951), God in Search of Man (1952) and Man’s Quest for God (1954). In the course of his lifetime, Heschel published 18 books and more than 100 essays. He was a professor at JTS until his death in December 1972 and, throughout that time, his personal history and religious studies informed his fervent social activism. A supporter of the civil rights movement, he famously wrote in his diary after marching with Martin Luther King Jr. in Selma, Alabama, “I felt my legs were praying.” He also opposed the war in Vietnam, was outspoken about the plight of Soviet Jews, and persuaded the Roman Catholic Church to revise passages in its liturgy that demeaned Jews or advocated their conversation to Christianity.

His daughter, Susannah, is a professor and Chair of the Judaic Studies Program at Dartmouth College. She is married to James Louis (Yaakov) Aronson, Professor Emeritus of Earth Sciences at Darmouth, and the mother of two daughters.